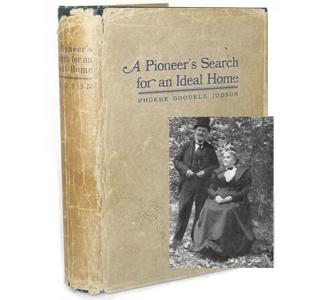 A remarkable Northwest pioneer, Phoebe Goodell Judson (1831-1936), along with her husband Holden, founded (and named) the town of Lynden in northwest Washington. In 1886 she started Northwest Normal School, which became Western Washington University. Her 1925 book, A Pioneer’s Search for an Ideal Home, was written from entries in the diary she kept upon leaving Canada for the Northwest in 1853. The Judsons first lived with her parents in Grand Mound, then in Olympia, WA (where they were among its first citizens), then Whidbey Island, WA before settling in Lynden in 1871. Her husband became the town’s first mayor.

Phoebe witnessed the execution of Chief Leschi; her husband was elected to the Washington state legislature; and the couple was connected with many other prominent NW pioneers, including Isaac Ebey, the first permanent white resident of Whidbey Island (who was beheaded by Indians); the founders of Whitworth College; and others. The book is a fabulously interesting story and a classic account of pioneering by a woman.