A Japanese photographer in a frontier Northwest town… 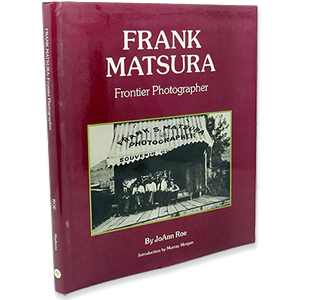 Frank (Sakae) Matsura, the Northwest photographer featured in this book by JoAnn Roe, had a fascinating, but somewhat mysterious life. His father and uncle were samurai, and he was descended from the 52nd emperor of Japan. Matsura (1873-1913) left Japan in the early 1900s, arriving in Washington State’s Okanogan country in 1903 living first in Conconully and then in Okanogan. He worked as a cook and took photographs in his free time, later establishing a photography studio. He photographed every aspect of the town of Okanogan and its life and inhabitants, as well as nearby towns. His photographs depict a nascent time in the area’s history, when homesteaders and Indians mingled freely. Matsura died unexpectedly, in 1913 and his photographs went unnoticed for decades, finally ending up in the archives of Washington State University and the Okanogan County Historical Society. He is considered a photographer of major importance.

The book is devoted to reproductions of his captivating photographs, highlights the early history of the Okanogan area and recounts what is known about Matsura’s too-short life.