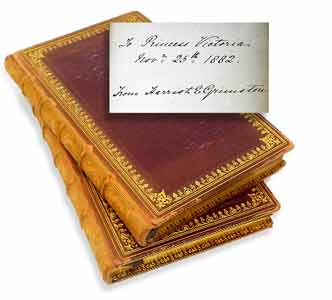 If you’ve been watching PBS’ hit series Victoria, you’ve probably noticed the
character of little “Vicky”, Victoria and Albert’s oldest daughter – Victoria, Princess Royal
— born in 1840. Vicki eventually married Frederick of Prussia and became Empress and
Queen of Prussia – but only for a short time, as her husband, Frederick III died shortly
after his accession to the throne.

This beautiful small set of two leather-bound books was a gift to Princess Victoria in 1882
from Harriot E. Grimston. The Grimston family was close to the throne: Harriot, the
daughter of the 2nd Earl of Verulam, was a lady-in-waiting to Her Royal Highness the
Duchess of Edinburgh. Her aunt Mary was one of Queen Victoria’s coronation attendants
and bridesmaids. On May 14, the 1891 edition of the Illustrated London News
notes that Harriot was entertained at a Buckingham Palace dinner.