An historic album of signatures 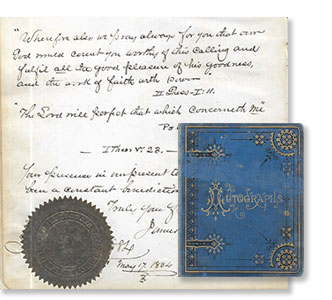 In 1884, knowing she was about to step into history, Seattle’s Rosamond Densmore, one of the first
group of women to serve on a jury in Washington Territory, set about collecting signatures of the
judges, clerks, lawyers and fellow members of the jury to document her experience. Interestingly,
women were first allowed to serve as jurors for a few years when Washington was just a territory, then
political changes resulted in those rights being rescinded. They were restored again in 1912 when the
territory became a state – and in 1912 Rosamond served again. She even managed to get Elisha Peyre
Ferry, the first governor of Washington state and the person who had appointed her, to sign her album.

Many of those who signed expressed their sentiments on this new right for women, including: “He is a
fool who thinks by force or skill, To turn the current of a woman’s will” and “If she will do it, she will; and
there’s an end on’t.” A fellow male juror – perhaps not so enthralled with his women co-jurors – wrote
“Oh the headache and the worry, Of a man up on the jury, When with women he locked up is, To decide
a point in law.”

Other signatures in the album include those of Thomas Burke, an attorney and chief justice of
Washington Territory’s Supreme Court – after whom Seattle’s iconic Burke-Gilman trail is named – and
Cornelius Holgate Hanford, a U.S. district judge for whom the community of Hanford, Washington is
named.