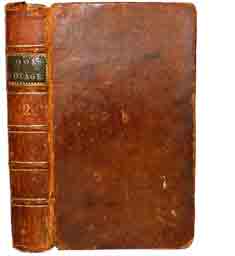 This first American edition of Captain Cook’s voyage is quite rare. A New Voyage, Round the World, in the Years 1768, 1769, 1770 and 1771, by Captain James Cooke in the Ship Endeavour, drawn up from his own Journal and from the Papers of Joseph Banks, Esq, was published in 1774. Cook ventured into uncharted areas and mapped parts of the globe that beforehand were virtually unknown. In this voyage, his first, he explored Tahiti, New Zealand, and Australia. It contains fascinating commentary on first-time British encounters with newly-found native peoples, such as this on the Hottentots: “We were told that the priest certainly gives the nuptial benediction by sprinkling the bride and bridegroom with his urine.” This volume is missing the illustration, and the first two pages are detached, but the rest is firmly bound in its original leather covers.