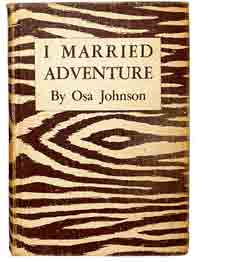 Osa and Martin Johnson were adventurers and documentary filmmakers in the early 1900s; their movies were very popular in their time. They traveled extensively in Africa, where they had a home, and also in Borneo, where headhunters still existed. I Married Adventure, by Osa, follows their globe-trotting life, beginning at age 20 when Martin joined Jack London aboard the Snark. Together, Osa and Martin circled the globe six times and made the first sound pictures of Belgian Congo gorillas and pygmies of the Ituri forest. This book, with its emblematic zebra-patterned cover, captures adventure on the frontier in memorable fashion. It was published in 1940 and is signed by Osa.