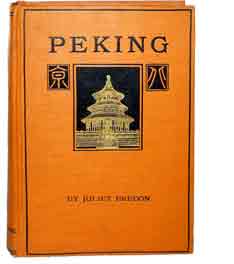 Although Juliet Bredon’s Peking, first published in 1922, is one of the all-time great guidebooks, it is so much more than that. Bredon was a long-time resident of Peking (now Beijing), and her intimate knowledge of the city is reflected on every page. Opening the cover is like stepping back in time to an ancient capital that no longer exists — a time when the Imperial City was still mostly unchanged, the Tartar Wall still stood, and camel caravans arriving from Central Asia were a regular sight. Rich with photographs, maps, and plans, the book is not only an entertaining read, but also a wealth of historical information and, for anyone interested in Asia, a genuine treasure.