The Travels of Marco Polo 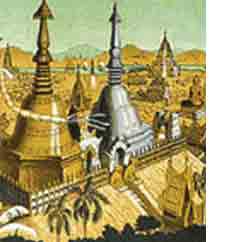 Cannibals, pirates, rubies as big as a man’s palm, a country swarming with lions, sorceries by diabolic art – Marco Polo’s tales of his travels in the exotic Far East brought back fabulous stories of riches and strange customs to the people of medieval Europe. Of Fuju (Fuzhou) he wrote: “They shave the hair off the forehead and cause it to be painted in blue…They carry spears and swords, and are the most savage people in the world, for they go about constantly killing people, whose blood they drink, and then devour the bodies.” The first edition of this account of his travels was awarded the Founder’s Gold Medal by the Royal Geographical Society, of which the editor – Colonel Sir Henry Yule – was a member. Yule investigated every bit of Polo’s accounts and annotated them with fascinating detail. This later edition of the set has three volumes and was published in 1903 (third volume published 1920); it has literally hundreds of handsome plates, illustrations, and detailed fold-out color maps and plans.