The Viceroy and the Nizam…1892 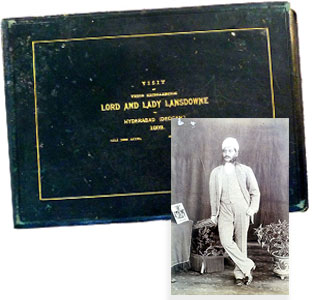 Henry Charles Keith Petty-Fitzmaurice, 5th Marquess of Lansdowne (1845-1927) was Viceroy of India from 1888 to 1894. Lansdowne made “Autumn tours” to important states in order to maintain relationships with rulers and exert a gentle influence, as princely states were not completely under British rule. Hyderabad, located in south central India, was particularly important to Britain as it was quite large and rich in natural resources. For this 4th Autumn Tour, Lansdowne and his wife arrived in Hyderabad on 3 November 1892, where they were received and entertained by His Highness the 6th Nizam of Hyderabad. At the time the Nizam was thought to be the richest man in the world and was famous for his extravagant lifestyle. A whole wing of his palace was devoted to just his clothes. The album contains 33 gelatin silver print photographs documenting the trip, all taken by State Photographer Lala Deen Dayal (1844-1905), the most successful Indian photographer of his day.